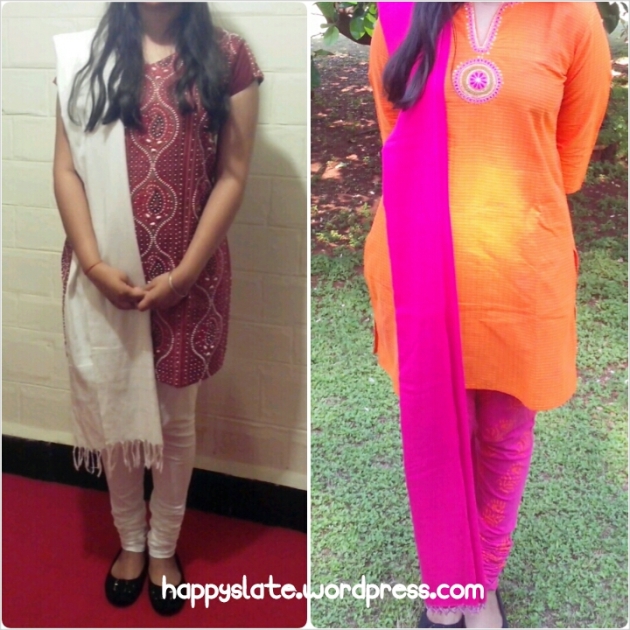 Indian wear was preferred for both the days and here is what I wore.

Yes! i know I have been away for really long, but I almost haven’t had any time on my hands. But, mom, dad and I, did sneak out some time to head to Mysore for the festival of Dussehra.

Now what is Dussehra and where is Mysore? You may ask.

Dussehra is a festival celebrated widely in India in almost all the states. The main essence of Dussehra is the triumph of good over evil as the Hindu Lord Rama had defeated Ravan, a king known for his wisdom who misused his powers for the evil. The funny thing though is, the Dussehra of the North India as compared to the Dussehra of the South India are so different. (they don’t call India the land of diversity for nothing).

Mysore is a historical city around 150 kms of Bangalore in Karnataka. The city has a royal family and although the royal titles have been abolished in India, the family is still widely recognized in the region and the beautiful palace remains. Now Mysore Dussehra really is something to see. The whole city is lit up and the palace has week-long celebrations, both public and private. Thanks to a friend of a dad’s friend, we scored some passes to see some private functions of the king on two days.

Our first night, we went for the king’s darabar, the king holds court that is. Now I’m not too sure what really happens here, but I do know he gives out gifts to the people who work for him. This is a private affair and like I said, we were really lucky to go in.

Below is the rituals taking place at the durbar. I couldn’t get to click a good photo minus the cover as I preferred to watch the scene in content rather than clicking photos. But sitting behind the curtain is the king. Under that golden umbrella. 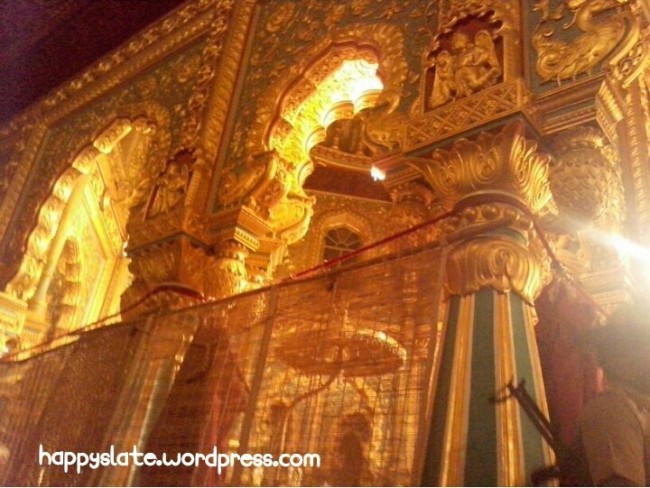 Below you can see the long shot of the durbar (where the king sits and holds court). This was done after the king left and we had some time to look around. 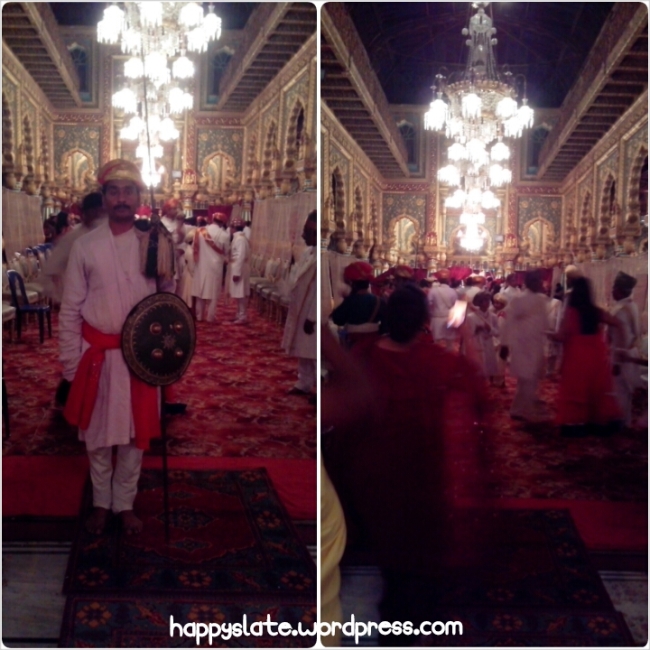 Below you can see the Mysore palace, all lit up. Putting pictures from two different cameras. 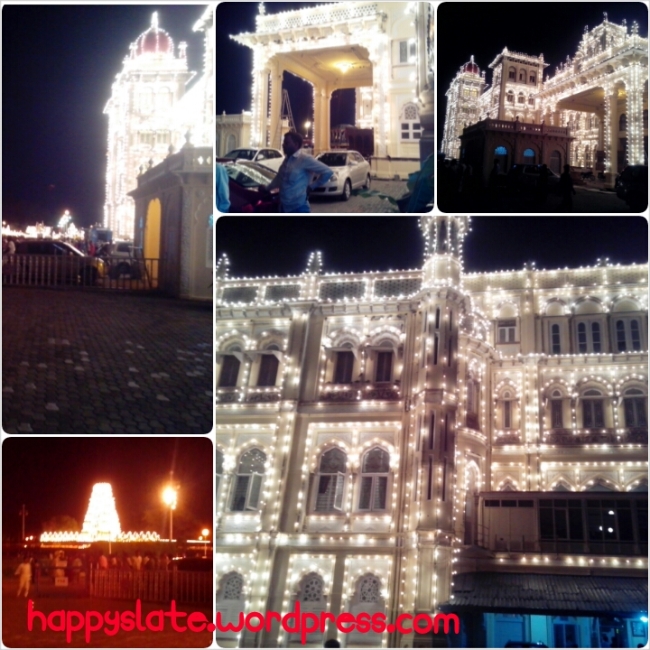 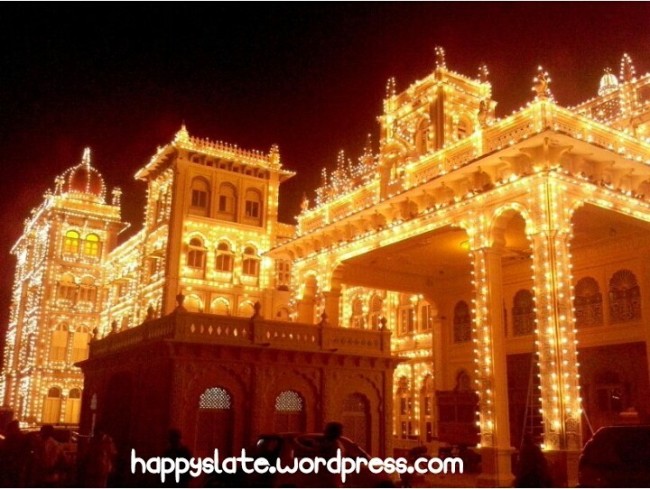 Day Two, the function was in the morning. It starts with a wrestling game (which we sadly missed because we were late), and then a procession. The procession took so loooong to start that honestly, it did get a little boring. While waiting, we did see the king coming in again and the elephants saluting him and then he went in. And then we waited again. I wasn’t that keen on the procession, but we got to see a different side of the palace this time. 🙂 The procession is open to the regular public but the seating is in the pen in the heat. We on the other hand got to sit in the palace and watch.

Below is the venue of the wrestling match. 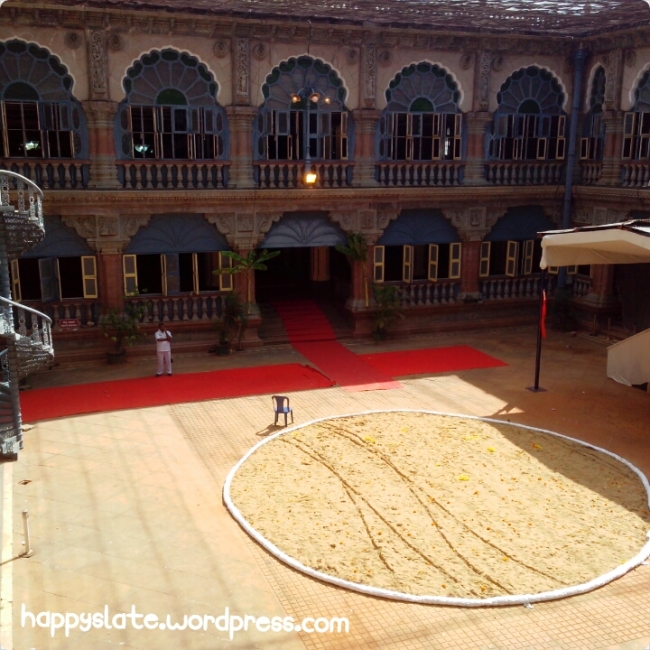 See below the venue where we were seated. One side was just pillars, and right next to it were steps where we could sit and watch the procession from. Sort of like a balcony. 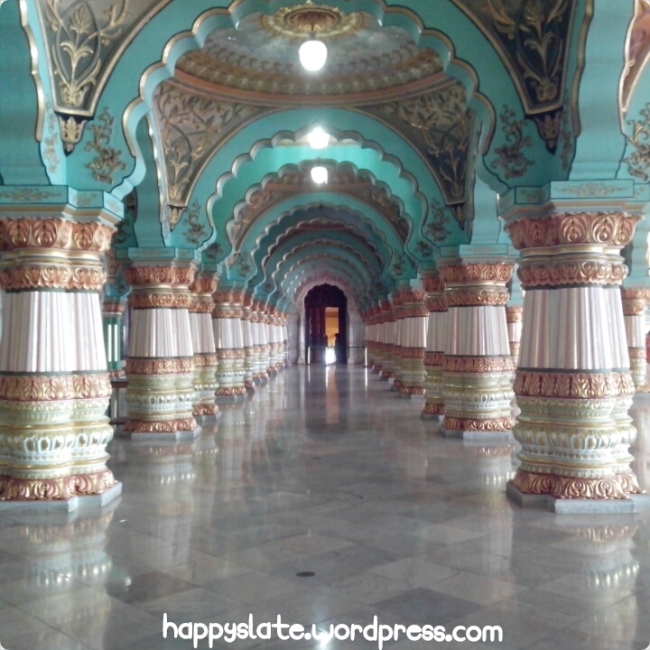 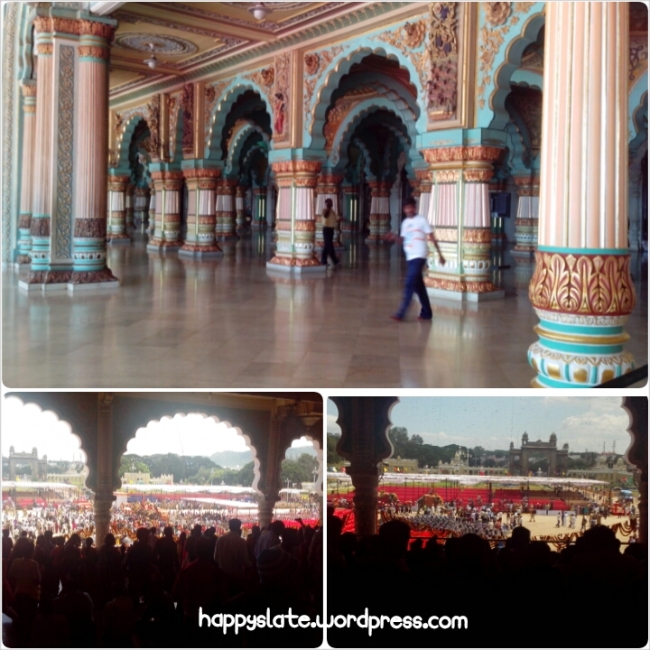 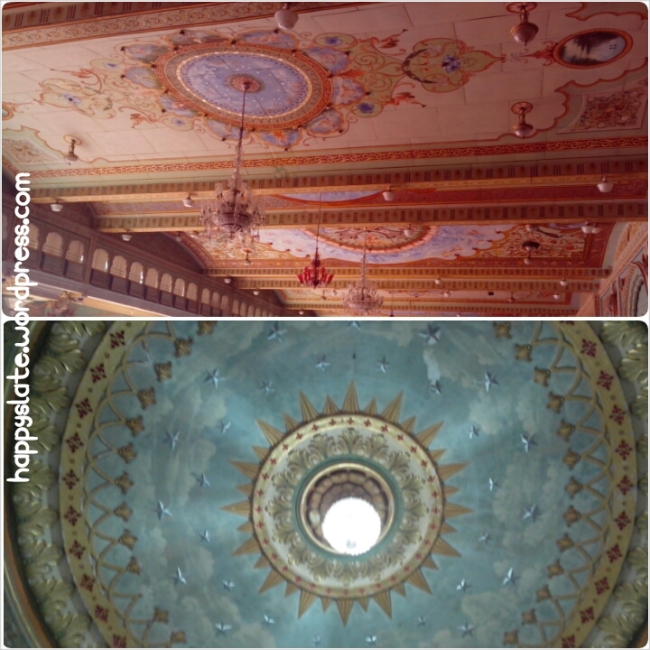 And some more pictures of the palace. 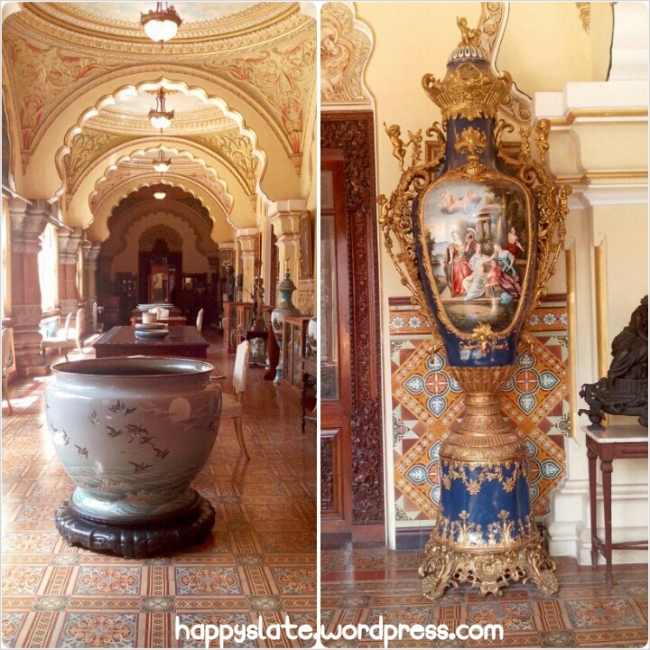 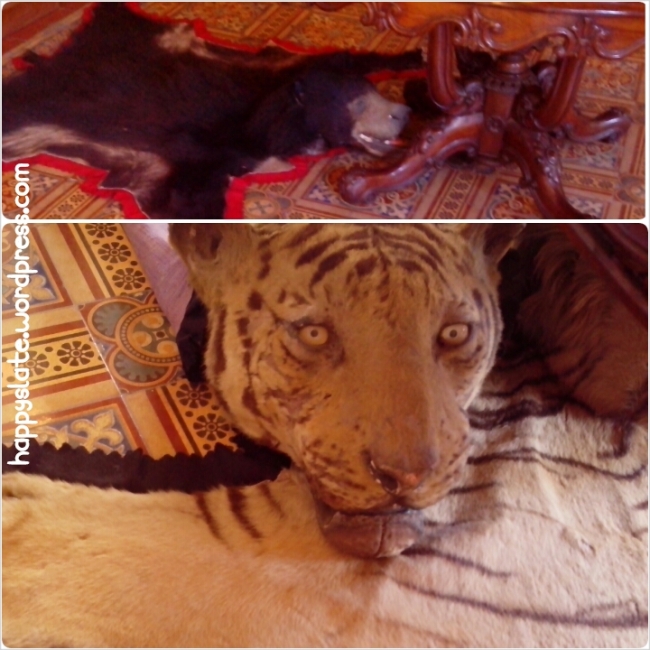 No, I didn’t dare to touch these animals. I know they’ve been dead for years, but no.

Below you can see thr oyal lift, complete with it’s own mini chandelier which is hard to see because it was so bright, that it just came out as a blob of light in the photo. ( We didn’t really have much time to change settings and then click photos) 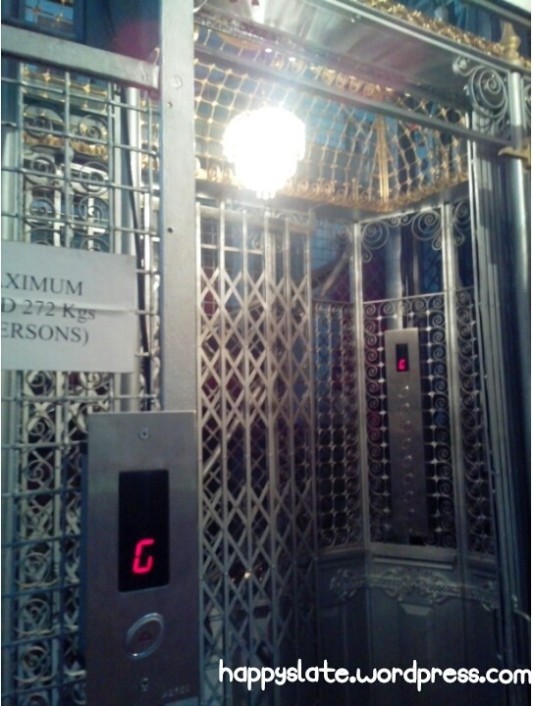 And finally, the festivities end with a ceremony where the throne is tied on the lead elephant, who then salutes the king and after around 45 mins to 1 hour, the throne is taken off. What disturbed me a little was the condition of the poor elephant. Why? Because that throne is 850 kilograms of pure gold!! Yes. 850 KILOGRAMS OF PURE GOLD! But a lot of locals told me, these elephants are trained by specialists. 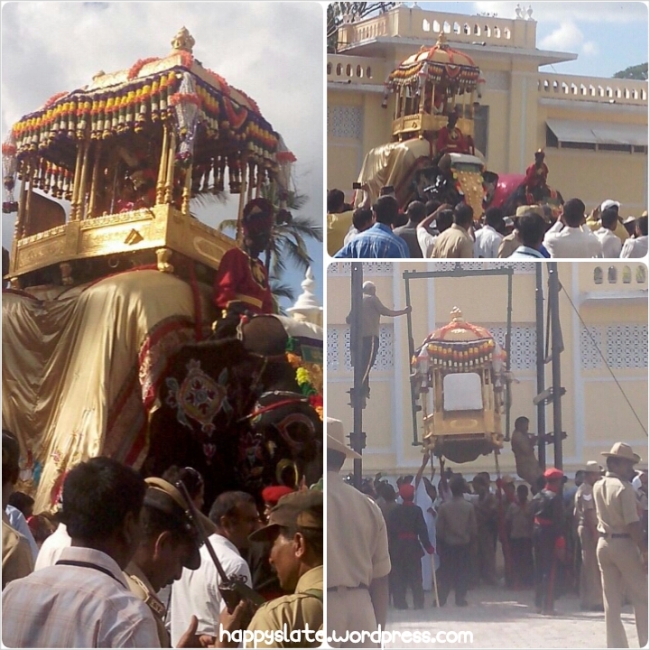 I hope you enjoyed these pictures. 🙂 And I promise to post more from now on. 🙂

I haven’t been around lately, I know, and I’m sorry. But I’m working on a little business of my own and work was on, in full swing.

Now that I have a little breathing time, I have dropped in to say hi and introduce two cute dogs. 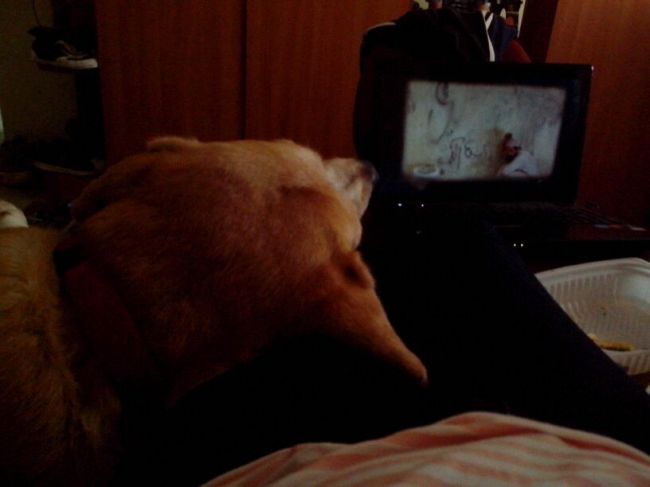 B and I were taking a lunch break and watching an episode of Homeland and he did not want to be left out. So he hops on the bed, puts his head on my legs and I kid you not, he watched that entire episode of Homeland with us like that. While eating our lunch with us, of course.

Just look at how adorable she is! And she’s so tiny. She’s currently at B’s house and his boy hates it. So jealous. And she, like the little cutie she is, runs like a crazy little girl around the house.

For the time being, I am in dog heaven and loving it! 🙂

It’s not really that big, but I’m so excited to share!

A few days ago, I came across an article on a blog where the writer spoke up about copyright issues regarding photographs. She shared her experience of how when she started a blog, she read a lot of blogs that used other’s images without permission but credited the photograph with the name and a back link.

She figured that was fine and started doing the same until one day a photographer asked her to take down a photo that belonged to him. After doing so immediately, the photographer chose to sue her. And he succeeded. The fact that she is a blogger, and using the photos for non commercial purposes does not take away the fact that what she was doing was wrong. And she ended up having to pay.

A quick Google researched showed me that such cases are happening more frequently now. So guess what I did?

Started a blog with free to use images!! 🙂 (I told you it wasn’t that big a news!)

So anytime you need a photo in your article, stop by and find one. I’ve labelled all, so a quick search should tell you if there is a photo as per your requirements or not. Feel free to use it, as long as you are not posting it on objectionably content. There is no need to give a link, but a little credit would be nice. 🙂

See you guys around! 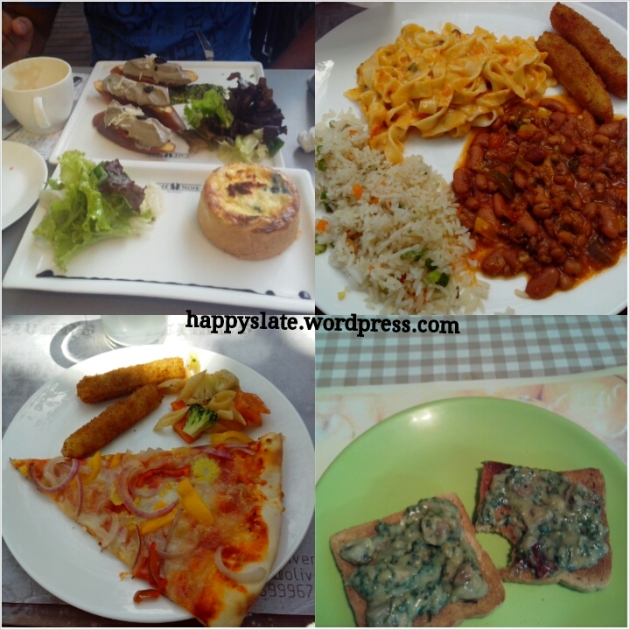 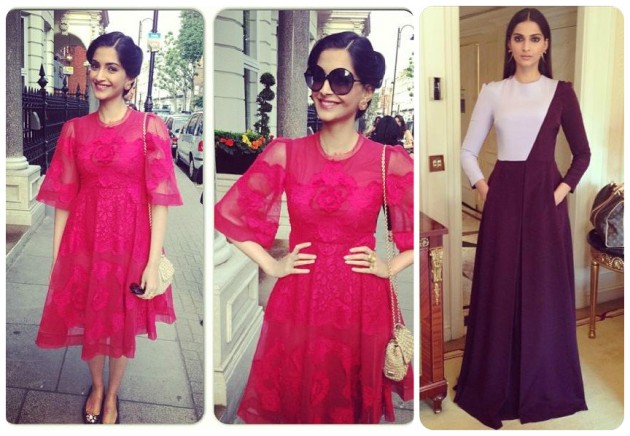 While she mostly stuck to Indian outfits during the promos of her movie, and wore Western outfits rarely, she looked stunning in these two! Taken from her official Facebook account.